There is news about the next evolution of the Milan, the Milan MK7:

As you may have heard, we are working on some improvements to the Milan SL and Milan GT.

We would like to improve some points and simplify maintenance for customers and dealers.

Our motto is: together for perfection! This means that we understand each other continuously in a process of development and improvement and we don’t want to stagnate in a status quo.

For this reason we decided to temporarily stop production so that we have time to implement any improvements. We plan to resume production in late February and start early March.

The development affects the following areas of the Milan SL and GT:

The wheel house has been given a new shape to minimize resonances and structure-borne noise in the component.

Furthermore, the wheel house is changed in such a way that 1x12 gear systems with their rear derailleurs and cassettes up to 52 teeth and 584 wheels are compatible and are not hindered in their space requirements.

We will be using the DF / DFXL swingarm in the SL / GT and the rear suspension from DF / DFXL.

We want to create more space for longer people. The floor pillar system of the earlier Milan did not offer enough space to put the seat far back. We are creating a completely new spar system. New rear derailleur hood on the underbody of the Milan

We are modifying the underside to create more space for various rear derailleurs.

Since we chose the rear suspension and rear swing arm on the DF / DFXL, we had to change the way the rear suspension mounts in the body of the Milan SL / GT and we created a horizontal bulkhead. This then also provides an additional overhead locker.

The new horizontal bulkhead for the Milan MK7

1. Due to the standard use of the DF strut in the MK7, the old vertical bulkhead of the Milan MK6 no longer fits perfectly.

2. The old vertical bulkhead in the headgear blocks free access to the screw connection of the safety module.

3. It also blocks the luggage compartment in the headgear.

Improvements for the Milan MK7:

5. Access to the light module (screw connection) is greatly simplified. 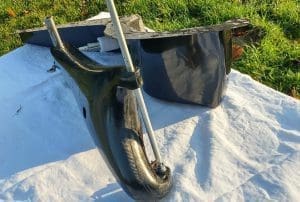 Due to the partially flat carbon surfaces, the rear wheel arch of the Milan caused unpleasant noise for the driver on bad roads due to resonance. Furthermore, due to the very small distance between the rear derailleur cage and the wheel housing, there was contact in first gear and thus structure-borne noise transmission.

Improvements for the Milan MK7:

1. The new wheel arch has spherical curvatures on both sides, which make it more stable (for example when pressure is exerted by luggage) and anechoic. The curve on the left is now 8 mm deeper in the area of the axis in order to get easier access to the central screw of the axis.

3. The new wheel arch will also be modified so that 27 inch wheels and cassettes with up to 52 teeth can be used.

5. The rear derailleur hood formed on the new wheel arch engages when the wheel arch is glued in the Milan into the molding of the bottom hood and automatically centers the wheel arch. This leads to more precise and reliable assembly in the factory.

6. The new wheel house receives a receptacle for the new DF swing arm, which is easily accessible from above and which greatly simplifies installation and removal as well as adjustment work on the swing arm. The standard use of the DF swing arm brings various other advantages.

7. Almost all types of velomobile today use this well-proven and very reliable mono swing arm. This leads to a simplification and standardization in the plant, which in turn leads to more process security. This swing arm also allows the derailleur hanger to be exchanged easily and is highly compatible with different types of derailleurs.

8. The DF swing arm is the most popular carbon mono swing arm in the world and has been tried and tested over many years. It is extremely stable and light thanks to the pressure-inflation process. Assembly is easier and is practiced daily in the factory.

Here you can see the left side in the stage of the renovation: 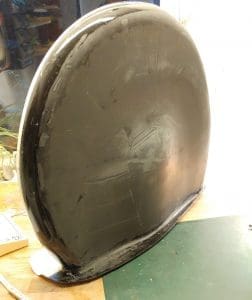 Here is the right side, with adaptation of the later functions: 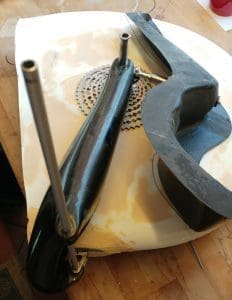 2. The swing arm bearing (especially the left one) is not freely accessible and assembly and adjustment are overwhelming for many dealers.

3. The screwed-on aluminum profile on the system box is difficult, time-consuming and complicated to assemble.

4. The seat support with the aluminum profile and glued-on foam rubber does not allow a sustainable adjustment of the seat inclination. The foam rubber compresses to 0 over time

Improvements for the MK7:

1. A completely new pulley box (for U-pulley and seat support at the same time) based on the new cross bar

3. Screwing to the sub-floor no longer necessary because it is securely seated

4. The contact surface of the seat is increased to such an extent that the aluminum profile that was previously screwed on is no longer necessary (less weight and manufacturing costs)

5. Rigid PVC foam panels with a Velcro system are used to adjust the seat inclination. These plates (each 8 mm thick + Velcro thickness) can be stacked as desired on the carbon surface and are ideal for quick seat adjustment without tools.

6. This rigid foam stack also acts as an absorbent buffer in the event of a rear-end collision

7. The new seat support leaves space between the wheel house and the cross member to comfortably reach the swing arm bearing (assembly and adjustment)

Here we see the prototype: 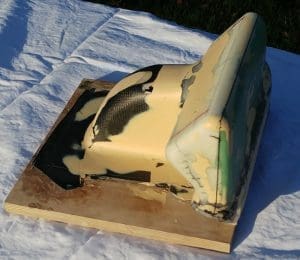 And here is a print from the first provisional form. This print is then finished and polished and then the production form is removed from it. 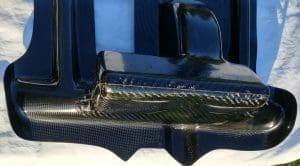 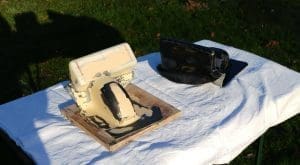 1. The central spar in the SL and GT is not yet well connected to the front wheel arches and the crossbar sometimes collides with the seat when it has to be set back far.

2. The whole spar system is difficult to laminate because it has too tight radii.

3. Furthermore, the seat attachment right next to the carbon spars is problematic; the seat usually does not really come into its lowest position. The stainless steel mounts, which are still being installed, have to be sanded down and do not guarantee a really secure hold for the seat.

4. The seat folds forward uncomfortably when you get out (or when you step onto the front edge). This is because the pivot point under the seat is too far back and creates a seesaw.

Improvements for the MK 7:

1. The new bars are now better adapted to the front wheel arches and leave enough space for easy assembly of the seat holder in their lowest position. The new cross bar now sits further behind and allows a very wide adjustment range of the seat to the rear.

2. The position of the pegs moves approx. 6 cm forwards so that in the future the seat will no longer rock when you get out of the vehicle or climb onto the front edge. Furthermore, the seat receptacle no longer prevents the seat from being lowered to the maximum because it is no longer located next to the lowest position.

2. The cross bar is now so far back that it also acts as a stiffener for the swing arm bearing zone. 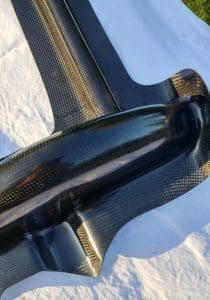