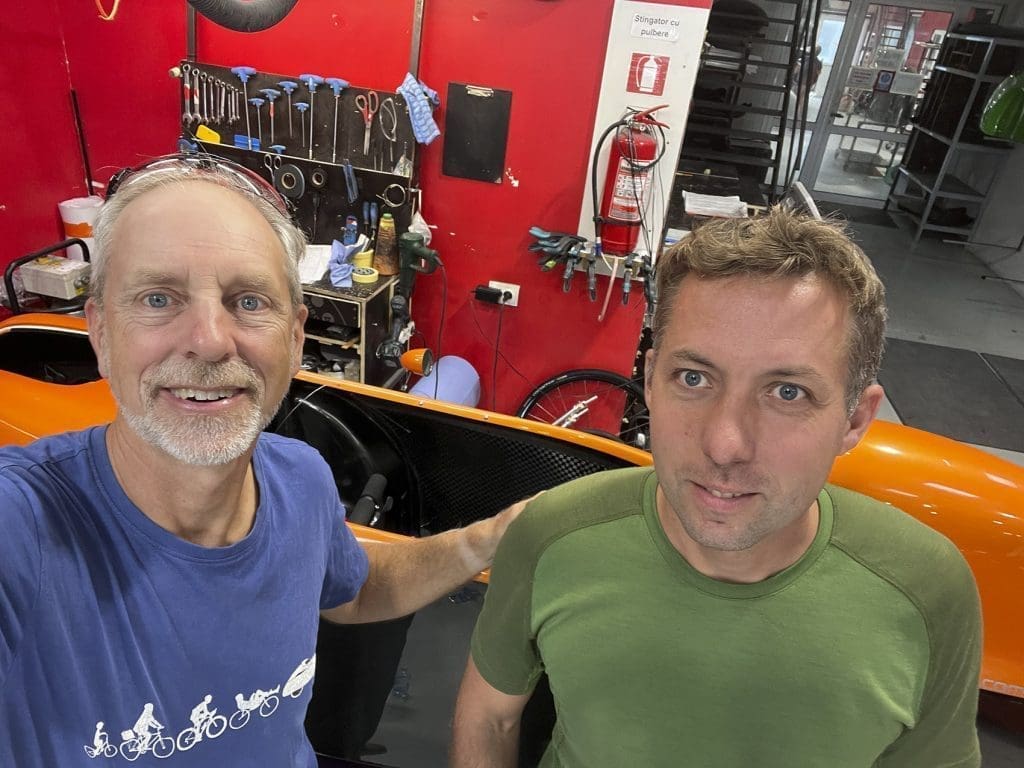 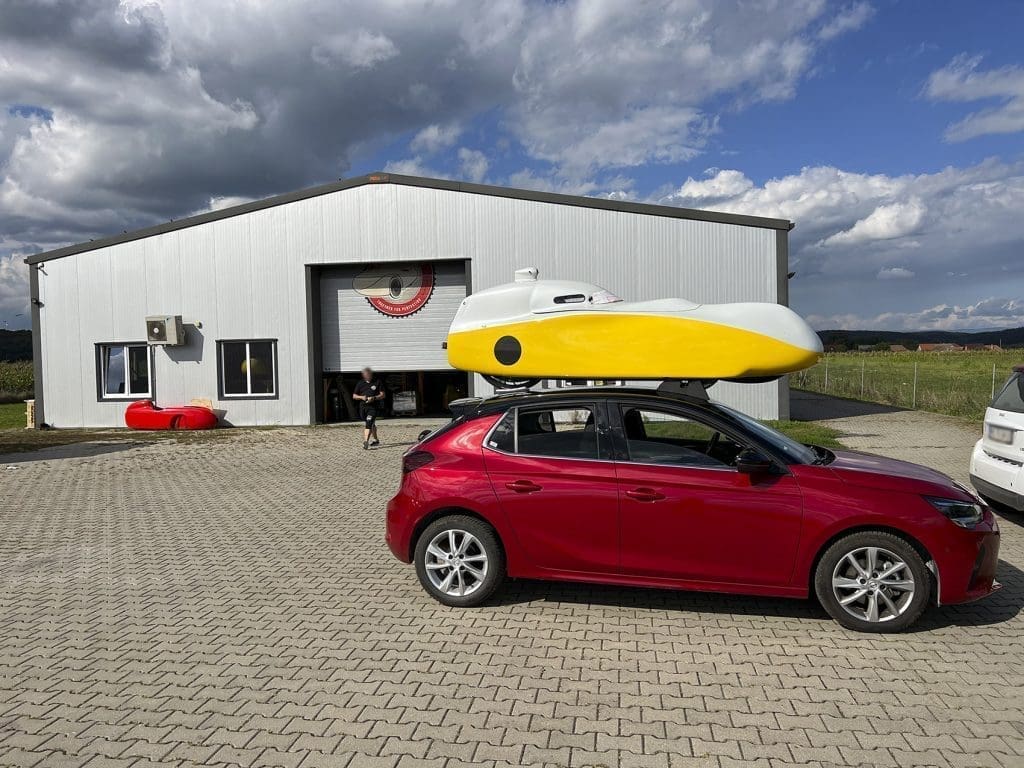 These words were written and sent to us by Greg Cantori from USA, after he visited our factory in 6-9-22. Thank you for your kind words!

Last week I flew 4000 miles across the Atlantic from Maryland to Frankfurt and then drove another 1500 miles across Europe in search of a Holy Grail in cycling: The fastest and best built human powered machine in the world!

Over the past four years I’ve been lucky to push my Canadian built Milan SL MK2 to nearly 100 km/h (58.2 mph to be precise) at Battle Mountain. I then completed a sub three hour century, not to mention numerous races including the Washington, North Carolina mid Atlantic 12/24. I also competed three times in Sebring Florida, accomplishing two 100 mile races and a 12 hour attempt.

I have learned a great deal from other Velonauts along the way, including Dan Kilda, Peter Borenstadt, Chris Evans, Dave Whitman, Dave Lewis, and Van Valks. Each one of them has freely and happily given me advice, support and even lent me parts and supplies to make those attempts a reality. Never in a million years did I consider myself an athlete strong enough to race, but over the last five years including a hilariously disastrous first Sebring, I have learned, adjusted and became faster each time.

Velomobiles are such amazing machines. I literally was commuting and doing errands one week, touring another and then a week later I was attempting a speed record. It’s a rare vehicle that can comfortably commute, tour and competitively race all within the same month!

I’ve been following the development of the refinements to the incredibly fast Milan and now the Mark 7, as many of you have.

I decided to head off to the factory in Romania to personally pick mine up and ride through Europe. Creating a dream two-weeks (too short!) Velomobile vacation before heading home.

Both the topography and cultures changed significantly as I worked my way east from Germany into the Czech Republic, then Austria, Slovakia, Hungary and finally Romania. Deep in the middle of Romania and in the middle of many farm fields I came upon the small neat factory with the Velomobile World logo on it.

There I got a chance to meet Jan and his three dozen dedicated crew, who work two shifts, five days a week to keep up with demand.

I was super excited to be shown around and got to see wheels built, with spokes being put into brand new hubs. I observed the finishing room where all the hundreds of small items are attached to the newly formed carbon fiber shells. Speaking of carbon fiber, there is a special room with negative air pressure and a suction table that holds the carbon cloth in place and sucks the carbon out. The staff was carefully cutting each piece of carbon before it goes to the fitting room where it will be laminated on the moulds.

I got to see the mould for the M9, Snoek and Milan. Did you know they actually get worn out over time and need to be renewed?

Outside there were climate controlled enclosed painting booths where the incredibly brilliant and deep metallic paint is applied. There is also a grinding room where the joints and seams are made so smooth they totally disappear.

Overall, the factory is extremely well laid out and organized with supplies stored neatly and ready to go. I learned about supply challenges, such as the drum brakes being back ordered. All it takes is one component missing to stop the entire production.

But it wasn’t just the highly organized methodical process and carefully separated production areas that impressed me. The real story is the vision, culture and the people from Velomobile World.

The vision is to become a major part of the new transportation philosophy that uses our muscles to travel longer distances faster, safer and more comfortably than a regular bicycle can. To show the way to a brighter transportation future.

One of my favorite phrases is “culture eats strategy for breakfast”. In other words you can have the best systems, processes, intellectual and technological advances, but it means nothing if your workplace culture is one of fear and loathing or being taken advantage of. Jan with the help of his management and production team has created a culture of excellence based on care for each person that comes to work every day. Following the slogan “Together for perfection” that perfectly describes what they stand for, the team members work every day to create the velomobiles and to make this dream company to become a reality and to grow.

Like many European businesses they shut down in August so that everyone can take a nice vacation. Some get bonuses when they meet or exceed expectations. There are so many other small ways through which Jan makes sure that the staff is well respected and treated well. So the culture is one of care and that care translates into the careful work that makes these Velomobiles extraordinary.

Literally right off the factory floor not only did my Milan SL fit me perfectly, I jumped in and we rode off and everything worked flawlessly.

Here are the significant improvements I immediately noticed. The Mark 7 is much much quieter. The front chainring area is much different, with carbon fiber structural tubes, not aluminum. The boom is a mushroom type attachment to the inside front and provides some air flow. Another type fits on top providing real rigidity.

The Battle Mountain hood (wonder where they got that name from?) has been refined. It’s also stiffer, fits better, ties down easier, is more aero and doesn’t rattle. The new adjustable and closeable NACA duct works like a charm. The access panels are now a game changer for maintenance and making adjustments.

I also love the new flex cover that you can use as a full cover up to your neck or only your knees. The silky smooth ride and near silence of the drive chain compared to the previous version is extraordinary. It hums.

The lighting system on the turtle deck is a great idea as it keeps the light up higher and also allows the whole system to be removed for daytime racing.

Some of the attention to details you’ll notice:

The cockpit coming is carefully smoothed as is the rest of the interior so there’s no sharp edges.

The coaming is very stiff so you can lift yourself out easily.

The electrical wire runs are carefully sealed and fully protected along the shell and kept out of the way.

The tiller has an adjustable wire to hold it off your body while riding and on and on!

Overall the great work culture and care from the staff has translated into a high quality machine, I know I’ll enjoy it for years to come!